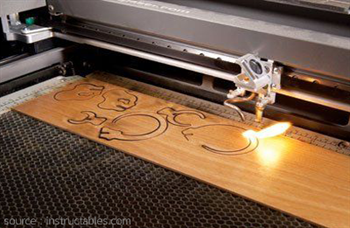 Lasers are powerful instruments that can be used for many purposes, including precision cutting. One of the most common ways that lasers are used is to cut metal in a highly precise manner. Whether it is a mild and flexible metal, such as aluminum or something more sturdy like stainless steel, lasers have the capacity to provide the precision cutting necessary to achieve the desired result. Another way that lasers are used is for customer engraving. Engraved Cutting Boards, a company that specializes in custom engraved cutting boards, uses lasers to create the intricate details of many of their engraved creations.

Basically, lasers are a column of extremely high intensity light, flowing through a singular wavelength. The most common laser used for cutting, CO2, functions on an Infra-Red sphere of the light spectrum, making it completely invisible to the human eye. The laser machine consists of a resonator, which creates the beam that travels a specific path to reach the designated target. Depending on the design of the resonator and the machine, it is possible for the laser to bounce in a number of directions, either by bouncing off of a mirror or the use of beam benders.

When a laser beam becomes focused, it will travel through the bore of the nozzle just before making contact with the plate.

The most common method used for focusing the laser beam is to use a particular type of lens. Another method used for focusing the laser involves the use of a curved mirror, which takes place in the cutting head of the laser. In order to achieve the optimum precision that is commonly associated with laser cutting, the laser has to be precisely focused, possessing the proper density of energy and the proper shape. If the laser does not possess the specificity required, the accuracy of the cutting can be significantly distorted in correspondence to the level at which the measurements are off.

Basically, as a large laser beam is focused down to a very fine beam, the energy intensity is multiplied exponentially. It is essentially the same principle experienced when you use a magnifying glass to focus the light energy from the sun to burn a hole in a leaf. The magnified density creates a rapid heating process which results in the partial or complete melting or evaporation of the material being cut. The type of burn that is used will depend on the type of material being cut.
With CNC lasers, the cutting head of the laser is literally moved over the plate in the shape of the desired cut or part, which ultimate cuts the part or shape out of the plate. The cut quality is controlled by decreasing and increasing the distance of the focal point from the surface of the plate.

While there are many other variable and parameters that directly impact how effective laser cutting will be, those mentioned here a generally universal. The idea is to make sure that all of the influential components are properly controlled in order to a precise cut.